Let’s go to school! Maybe not quite yet. 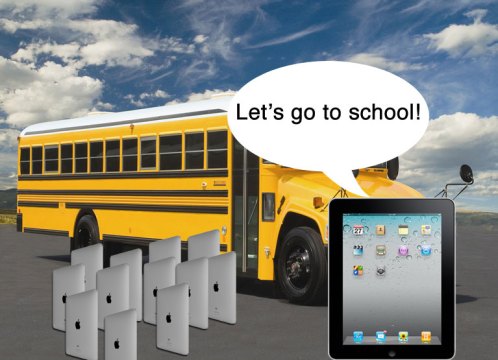 I recently responded to a post Less Do, More Think, where Jerri Kruse warns the educational community about rushing blindly towards technology integration. I agree with many of his points, and there have been some good comments left on my post. Thanks everyone, but alas I am afraid that Jerri’s fears are being realized. My wife showed me this article from the NY Times. It’s a quick read, but I couldn’t help but smack my forehead, close my eyes, and slowly shake my head. Read on past the break to find out why I, Jerri, and a few others are more than a little concerned.

The gist of the story is that some schools in New York are giving their students iPads for educational use. Doesn’t sound so bad huh? Seems innocent enough right? Just wait, the kicker is coming. Throughout the article there is no mention of training or support that is given to the schools at all. It seems like they pulled the procuct out of the box, set them up, and passed them out and expect the teachers to simply . . . do. The fact that this is happening mid year is also a little alarming. Check out this quote by Larry Reiff an English teacher at Roslyn High school in Long Island. “It allows us to extend the classroom beyond these four walls.” Great, but you didn;t beed ti spend over $30,000 to do that. A Blogger/Wordpress blog is free and it extends the class beyond the classroom. How about Edmodo or a slew of other Web 2.0 applications?

Later in that same sentence, it states that Larry now posts all of his information online. So what? A Wiki, LifYo, Weebly, etc. website can also do that . . . for free! Does he or his students really need an iPad to view or interact with this information. A netbook or certain smartphones could have done that right off the shelf and for a lot less. This point is brought up in the article.

“But technology advocates like Elliot Soloway, en engineering professor at University of Michigan, and Cathie Norris, a technology professor at the University of North Texas, question whether school officials have become so enamored with iPads that they have overlooked less costly options, like smartphones that offer similar benefits at a fraction of the iPad’s base cost of about $500.”

This brings up a question of when this version of the iPad becomes obsolete and they start to break down and fail, will the school be willing to pony up the cash for new ones? Food for thought me says.

Dr. Daniel Roslyn the superintendent of the Roslyn school district says that the two classes that have iPads will save the district an estimated $7,200 a year due to reduced printing and textbook costs. There is definitely something there. You can say well done, you’re going green. Green, as in the color of money green. One could argue that this will free up a lot of money and allow districts to reinvest in professional development and extra training and support for the school. That is definitely a real argument for the iPad, but what about the extra costs of technical support, repair costs, cases, storage and charging space?

OK, the iPad can save a lot of money by replacing textbooks, paper, and making schools “greener, but will it actually improve the learning process? Will it truly engage students and make learning meaningful and help with retention? That is a lot of questions, but the commenst of some of the principals interviewed make me dubious. A principal in Arizona had created an iPad lab named the iMaginarium (does Apple own that yet?). Anyway, he said ”of all the devices out there, the iPad has the most star power with kids.“ Great. We bought something for the kids they really wanted. I guess we should go out and buy a classroom set of X-Box 360’s with Kinect sensors and teach that to kids instead of normal PE. I mean the kids think it’s cool, so it‘ll work right?

Scott Wolfe, a principal from Rosyln, said that ”I think this could very well be the biggest thing to hit school technology since the overhead projector.“ Wow. The overhead projector, or as I like to call it, the anti-engaging machine, was the biggest thing to happen to educational technology in all of the 20th century? Not the micrprocessor which led to inventions like the home computer, laptop, and graphing calculator? Not wireless technology which can allow a school have access to their network and the Internet without miles and miles of wires? Not the Internet? No, no, no Mr, Wolfe decided the overhead projector was the best answer. Now, I’m giving Scott Wolfe a hard time here, and I don’t want to paint him as dull or obtuse. He is a principal and obviously didn’t rise to his administrative role by being dim-witted. I just wish he would of thought about his answer a little longer. This makes me wonder about the decision to push for iPads for the whole school (which Roslyn hopes to do next year).

Another argument against the iPad implementation was made by Larry Cuban, a professor of emeritus of education at Stanford University. He says ”iPads are marvelous tools to engage kids, but then the novelty wears off and you get into hard-core issues of teaching and learning.“ He suggests that the money would be better used to recruit, train, and retain teachers. My colleague Jerri Kruse over at Teaching as a dynamic activity is probably nodding in agreement right now.

Let me explain a little more. I am not against technology in the classroom, nor am I against the iPad in the classroom. Heck I write articles about educational iPhone apps. Let me tell you, I have not come across any that I think could replace a textbook or even come close. There seems to be no serious educational benefit from using the iPad, other than it is technology.

It seems I’m not the only one who is a little concerned. Check out this post.

Now for someone who is for it, and he has some experience here, read Stephen Friars reaction to the article. He is implementing one-to-one iPads in his school in Scotland. He makes some very interesting points for the integration. I hope that I am wrong and he is right. What I do like is his spirit and hope for technology. I’ve (and many others of you) have seen technology been thrown into the classroom without proper training and support and see it just fail and become underused, but let’s wait and see.

I teach middle school technology and love to play around with tech and teach students and colleagues alike. You can read my blog at www.itbabble.com
View all posts by Patrick Cauley →
This entry was posted in iPad, Opinion and tagged ed tech, iPad, itbabble, Jerri Kruse, NY Times, patrick. Bookmark the permalink.

2 Responses to Let’s go to school! Maybe not quite yet.