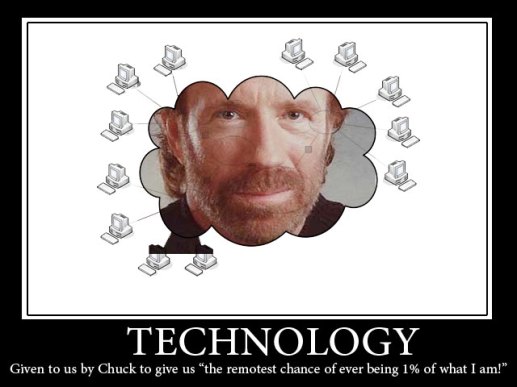 We here at IT Babble love to give shout outs to true innovators in the field of technology. You know people like Bill Gates, Steve Jobs, Mark Zuckerberg, and Richard Byrne, but today we are saluting the greatest of innovator in just about any field. Chuck “mother f&#$ing” Norris. Read on past the break to discover the 14 ways Chuck Norris has influenced technology.

1) All CAT 5 and Fiber Optic cables are created from Chuck Norris’s beard whiskers. THIS IS TRUE!
2) Al Gore did not invent the Internet. It was actually given to him by Chuck Norris on his 33rd birthday.
3) Robert Oppenheimer and his team did not split the atom. It was actually Chuck Norris punching a glass of water. He gave them the credit because most of the scientists needed girlfriends.
4) The movie industry special FX divisions were created as a way to simulate what Chuck Norris can do anytime. They are thus far failing miserably and 3D technology isn’t helping their cause.
5) The advancements in weaponry were needed to keep up with the sheer power of Chuck Norris. This led to the arms race.
6) All plasma TVs are based on an ounce of droll that was collected from Chuck Norris during an afternoon nap.
7) Space travel was supposed to be powered by flatulence produced by Chuck Norris. All the scientists involved though were unable to safely harness the power without blowing up 1/3 of the Earth. One day though . . .
8) Steve Jobs wears dark clothing in an attempt to hide from Chuck Norris. He is afraid because he rejected the “Chuck Norris Roundhouse Kick Extravaganza“ app. Mr. Norris has sense forgive the frail man, but likes the smell of his fear.
9) Wind turbines were invented to harness the power of Chuck Norris’s breath while he smokes. Ecologist feel this is the energy alternative the world has been waiting for.
10) Mark Zukerberg has 500 million friends, but that is only because he posed with Chuck Norris for a picture earlier in his life.
11) All antivirus software use antibodies from Chuck Norris’s sweat. Too bad it evaporates which is why you have to renew your antivirus license every year.
12) Chuck Norris does not use computers. He merely blinks and downloads whatever he wants.
13) People feel that technology is an ever increasing important part in our life, but this is not true. It is merely a step closer to integrating Chuck Norris into our everyday lives.
14) Technology innovators know that Chuck Norris has all the answers to technology. They don’t ask him for the following reasons: their head would explode or Chuck Norris would roundhouse kick them. Either way death is never a good alternative.

So there are a just a few reasons why we celebrate Chuck Norris today. If you have any you’d like to contribute, just leave them in the comments.