What do I think? Scan the QR code below and find out!

If you don’t have a QR reader or know what one is, then just read on past the break to get my take on QR codes and education. I think it will be worth your while. As always, be sure to leave a comment. Omar and I love those things!

Well, I think they’re kinda stupid and gimmicky for classrooms. So let’s get a quick background of what QR codes are and then we can get into it. They are two dimensional codes (like the one above). The QR stands for quick response. They’ve been around for more than fifteen years and can found on billboards, in magazines, on TV, just about anywhere.In order to view it you need a smart phone (iPhone, Android phone, Windows Phone 7, etc.), a program that lets you scan them (many are out there and free) and you must have access to the Internet at the time you scan it. When That info can be a link to a website, a file, a message, etc. They are primarily used for advertising, but over the past two years (probably longer) teachers have been talking them up as a cool and effective tool to be used.

Cool? Yes. Does it make for better learning? That I’m not quite so sure about. What I’m going to do now is take a bunch of ideas I found on the old Interwebs (let me tell you, there were a TON out there) and quickly discuss other ways to either achieve or why it’s a bad idea.

The Scavenger Hunt
This sounds cool and I’m sure it is too. Have kids scanning QR codes with their phones to get the hints on the next clue. The problem: not every kid is going to have a several hundred dollar phone that has a data package (the ability to get online without WiFi). I teach in a pretty affluent school and I still see high schoolers without the type of smart phones required to unlock QR codes. Below, I’ve offered a different solution: 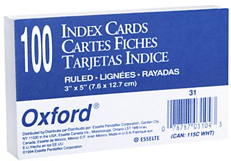 Instead of a QR code and an expensive smart phone, what about index cards? It’ll set you back $1.49 (from staples.com). The result is the same and everyone can participate. No real socio-economic boundaries anymore. Also, it’s a lot easier to recycle paper than cell phones.

Replacing Flashcards
Some people have said, it can also be used to replace the simple rudimentary flash cards. Why not use the index cards mentioned above? Even better, if you want to use technology with this idea, you can’t really go wrong with Quizlet.com?
Let me explain what’s wrong with the QR code and this concept. So you’re studying some Chinese and you have the character and a QR code underneath. For all the rice in China you still can’t remember what that character means, so you pull out your trusty smart phone, load up the app, scan the QR code and wait a few seconds to see the meaning of the word. To me it just seems like it’s an extra step that is not necessary. The QR code does not improve the flashcard concept at all. It’s just another form and one that takes a little bit more time than the traditional or by using Quizlet.com. By the way, if you want some pre made Chinese flashcards on Quizlet click here.

Using QR Codes to assign homework assignments
I’ve also seen the idea of embedding a homework assignment in a QR code and then making that QR code accessible to whoever needs it. Again, we go back to the problem that not every student has or can afford a smartphone. Also, this is something that parents may not understand as well and if a child doesn’t do her/his homework and that parents are upset, I don’t think that sitting down and explaining their child did not use the QR code correctly or at all would be a good argument. I’m sure many parents would fire back with the suggestion of just writing the homework out, putting it online (class blog, Moodle, Edmodo, class website, I think you get the idea) and leave it at that. The problem again my friends is we are adding another step to something that doesn’t need another step.

Using QR Codes to Link to Important Forms
This was suggested and I guess this idea isn’t terrible, but wouldn’t a hyperlink on a website work just as well? The QR codes would certainly draw the viewers eye, the problem is, these codes are meant to be viewed (primarily but not exclusively) on a mobile phone. If they have a PDF to fill out, it would be much easier to download it to a computer than a mobile phone. Once again we are adding unnecessary steps. If a form needs to be filled out and the deadline has passed, are you going to email the form home or email a QR code home with instructions on how to access to form?

Using QR Codes to Give Feedback
I saw this idea on the blog Primary Bits and Bytes (great blog) about putting a QR code on the front of a student’s folder and you can give feedback (in pretty much any form) to that student anytime and the student could access it at anytime. The problem is anyone can scan and view it. What if the feedback was a bit critical or something that the student may not to really want everyone to have access to? Well, this possess a problem because anyone can scan it (you don’t need to be three inches away, you can scan from quite a distance). There are better ways, email, Edmodo, Moodle, or how about a face-to-face meeting?

Using QR Codes for Polls
The idea here is there is you have a question and some choices. The student scans the QR code and immediate feedback is given. You can quickly see which answer the students have picked. Why not use Polldaddy.com or another similar site to create it, post on Edmodo, Moodle, your blog, or class website and there you go. Just as effective and no one has to pull out there phone to take a picture of a code. If students don’t have a computer but a phone, then they can bring up the poll on their phone just as easy.

There were plenty more ideas out there these are just some that really stuck out to me or that I read more than once.

Why All the Fuss Patrick?
Well, I read a piece on Mashable about how QR codes are here to stay and that they have grown over 4000% (that is not a typo folks) in the past year. That’s fine and I’m cool with that. I just don’t think that QR codes offer any real engaging learning opportunities. If they do (as mentioned above) I feel there are better methods to achieve your goal than having your student whip out and take a picture of a QR code. Of course Mashable it talking about the use of QR codes in marketing and advertising in that piece.

In my research I read a lot of articles about how great QR codes. I did not find one article (though I’m sure there are some out there) who criticize these codes as a learning tool. To me it just seems very gimmicky to get a student to look at a file, a website, or some information. If the students have their phones out and are scanning these codes, they can also quickly jump on Facebook, send a text, quickly check their email. The temptation to be distracted is also another factor. While many educators will take steps to limit this distraction, they can never eliminate it.

Some Ideas I Liked
There were some ideas I came across that I did like. One teacher put up posters with QR codes on them all around the school. The idea was to generate buzz and awareness about an upcoming event. Good idea and I can see it working. Another teacher used QR codes as a way to tell a digital story. While this idea was referred to, I never saw any details about how it was done. I guess I needed to dig a little deeper, but it sounds cool, I just can’t think how it would work though. If anyone knows, please let me know. I’d appreciate it. Another teacher uses it to compile a list of all their sources for a presentation. Clever and an easy way for people to get that info too. I liked it so much scan and check out my sources (wow that sounds bad eh?) below. Another one (it can be found here) was a Periodic Table entirely made out of QR codes. When they are scanned it takes you a YouTube video about the element. Kind of clever but certainly time consuming.

I don’t hate QR codes and I don’t think that teachers using them in their classrooms are bad educators. I just can’t see spending lots of time trying to tie this into my units or daily routine. I use Edmodo and blogs to reach out to my students and parents and I can’t see the QR code adding anything to the teaching and learning process that happens in my room. I could be wrong but I don’t think so.

As Always . . .
If you disagree or agree, leave a comment. I’d especially like to hear from the people who think I am an ignorant fool who doesn’t know a good thing when he sees it. Let me know where I’ve gone wrong and try to change my mind. 🙂

31 thoughts on “QR Codes and education”