In July of 2010 I started blogging at IT Babble. A year and a half and nearly 150 posts later I still love it. I’ve been reading some blogs for a while now and it seems every few months or so people explain why they blog and why they love it. Me? I’m going to take a different approach to this. Instead of explaining why I enjoy blogging and why I think it’s worth while, I’m going to give you some bad reasons for blogging about ed tech. Want to see them? Read on past the break and have a chuckle.

Bring out the honeys!

I’m happily married but if I was a single man on the prowl, starting an ed tech blog is probably not the most effective way to meet all the pretty ladies the world has to offer. Don’t get me wrong, I’m not saying that people that blog are ugly (check out Omar). I’m also not saying that people who read blogs are ugly either. I just think using an online dating site, heading out to some mixers or generally finding ways to interact with those people you want to get jiggly will greatly improve your chances than writing an ed tech blog.

SHOW ME THE MONEY!

There are a few people out there who probably make a pretty nice living off of their blog, but I’m willing to say that the percentage is pretty low. Add ed tech blogs to that filter and the percentage drops even more. I mean Omar and I already had to return our Ferrari’s since IT Babble hasn’t hit the 1 million views a month we promised the dealer it would. In fact, they never even gave us the keys 😦 but here’s hoping for the future.

I need to kill some time 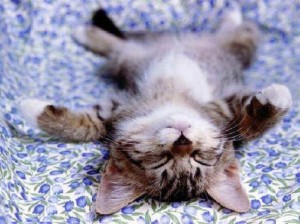 I’m a teacher and while I do have my summers off, during the year I’m logging 50-65 hour weeks (easy) and add in there a few extra hours for blogging, a two year old and a pathetic for out regime and you can see that my schedule is probably pretty busy like yours. So there are definitely weeks that go by that I wish I could just go home, crack open a cold one and just veg out.

Give me a raise! 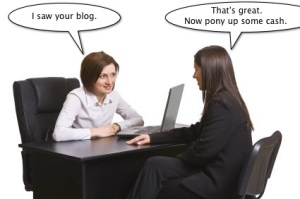 I guess this is kind of “SHOW ME THE MONEY” but strolling into my principals office and saying something to the effect “You know I have a blog now? How about an 18% bump in pay or I’m taking my talents elsewhere? What do you say there tough guy?” Something tells me that conversation will not turn out the way I may dream about. It’ll probably end with one of us being terribly embarrassed and another person laughing pretty heartily. I’ll leave it up to you to decide what role I’d be playing. Want a bump in pay? Look for opportunities in your school/district. Chances are blogging alone won’t open up that door.

Even the most well known ed tech bloggers are kind of revered like rock stars in their own circles. I don’t know of any of them who have received front row seats for the Lakers or shared the red carpet with Brad and Angelina. If you want that type of fame and notoriety, then maybe blogging for ed tech blog is not the way to go. Who knows, maybe Omar and his good looks will be on the cover of People magazine one day. You know for the sexiest male, ed tech blogger, with glasses, wife, daughter, who likes  Nacho Libre.

So there you have it. If you have a few more poorly guided reasons for blogging leave them in the comments.

1 thought on “Bad reasons for blogging”