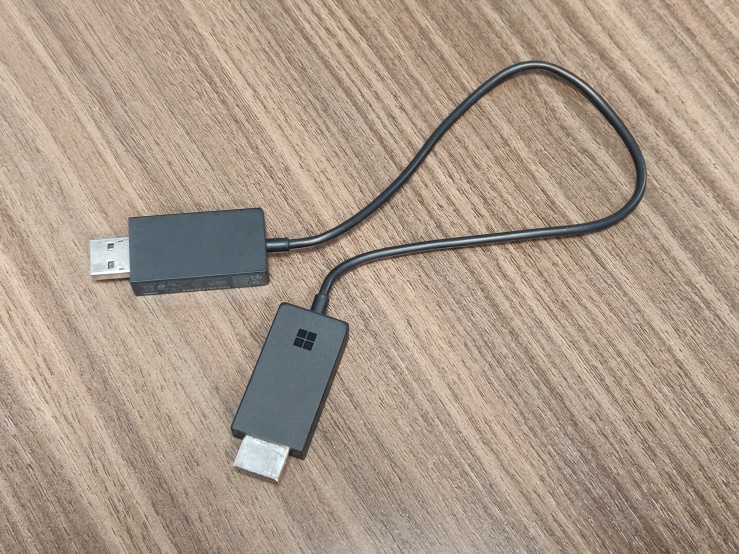 This is the final post of this series. I’ll link all the reviews at the end of this post and link them all on their own page.

Here is the rundown. It uses something called Miracast technology. It is found in a lot of devices. I think Epson even makes some projectors where it is pre-installed. It’s cheap and it works. Let’s dig into it

This is the champ when it comes to price. One of these adapters will run you $50 USD (though currently on sale for $40). The next cheapest option is the Apple TV HD which costs $150 so this thing is $100 cheaper than its next competition.

So price is great!

What can it do?

It can display video and sound from your Windows 10 computer to an external display wirelessly. It can be used to mirror your display or extend it as a second screen. There is a way you can rename it and you can add a password to it if you’d like.

One thing it cannot do is work with Macs. There maybe a third part software that you could install to make it work, but you will be better off just using Airplay with an Apple TV.

As you can see above there are two parts to this setup. A USB connection (which is how it powers itself) and an HDMI which is how it delivers the image and sound to the display or adapter. There is no audio line out so the sound will be going straight to the projector or display, so there is that limitation.

Connecting is pretty straightforward. Your PC (using Bluetooth) will pair with the wireless adapter.

I picked another TedTalk because they usually have lots of talking and closeups so you can see if the audio is in sync with the video. As you can see here it’s not too bad. Sorry for the low volume – there was a class going on next door.

It’s not too bad but there is a small lag. The original video was for 45 seconds but there were a lot of cuts to visuals and wide shots. Is it as good as an Apple TV or BenQ Instashow? No, but it is better than the Mersive, Barco and Airtame.

Honestly – there weren’t too many issues. It does take a little time to power up and be ready to connect to. I did use this for 6 weeks last school year as I filled in as a math teacher and was only dropped once during that time. I rarely streamed any videos though, just me and other students using it to solve math problems.

There was one time I accidentally connected to the wrong adapter and a teacher next door politely me asked to disconnect. 😬 Sorry about that Trent. So you can’t just kick someone off but that may be an OK thing.

Another time I was having an issue connecting to it and quickly tracked down the issue that my SurfaceBook’s (1st gen) WiFi adapter was locked to only 5GHz signals and couldn’t see the adapter. This is obviously not something that your average teacher would know to look for, so that could be a problem for some.

There is no management of them. Even Apple TV’s can be placed into an MDM (mobile device management) and somewhat managed. These on the other hand must be individually managed, but like most of these devices covered in these reviews, there isn’t a lot to do with it once it is plugged in and set up. You just leave it there.

You can rename them using your computer and you also can add passwords to them for security. I do know that you cannot kick someone off once they are connected.

YES! It’s simple, easy to use and it works fairly well. It’s obviously not perfect but at $50 a unit I think people could learn to live with its short comings. Obviously, the big caveat here is that it only works with Windows 10. If you have a mixed environment (like a BYOD) then this is not a solution.

Will it replace Apple TV’s?

No – we are an Apple school for the most part. We do have a single teacher who uses a Surface Book and he does use this adapter while teaching and he seems very content with it. Since this doesn’t work with MacBooks then it is a quick no for us.

If you’re a Windows 10 school – it is seriously worth your consideration. The price is hard to argue with and the performance is surprisingly good for something so cheap.