Here we are again. Episode 53 and still going strong. This episode is sure to give you lots to talk about in the break room as delve into some familiar and new themes. Check out the agenda below and be sure to subscribe to us on iTunes

Listen to us on Podomatic HERE!

Blockly is basically a project developed by Google meant to help students learning the logic of programming (much like Scratch or App inventor ). I heard about from Freetech4teachers and was pretty excited to see how Google was going to inspire new and inexperienced programmers like myself. Richard Byrne suggest it might be a good introduction to if/then statements. I can’t disagree but there are better solutions out there. Well it wasn’t exactly what I had hoped.

I won’t be using Google-Blockly anytime soon because it is just too bare bones. It doesn’t offer the depth of features and options that Scratch does. That doesn’t mean that it won’t be better later on, just right now it is a new project and has a lot of growing to do. To get a sense of what it offers check out the images below. I’ll keep my eye on it but for now download Scratch if you’re looking for a visual programming language.

Here is a quick maze game that you can interact with. The goal is to program the person to get to their destination. Not a lot of choices to chose from. What I like about Scratch are the multitudes of ways you can solve problems through programming and the rich community and examples it offers. Blockly does not have this . . . yet. 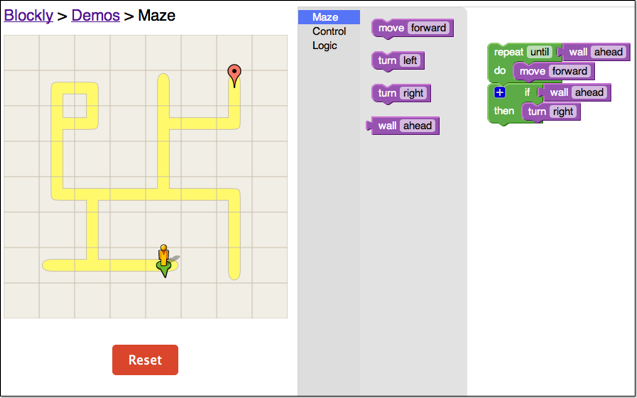 That's what we are here for. We want to help teachers and educators integrate technology in the classroom in sensible and relevant ways. Just drop us a line by commenting on any of our posts and we will get back to you as soon as we can. And don't get stressed out...crack open a cold one on us :o)